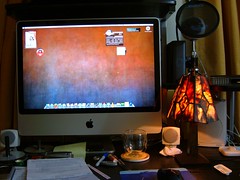 Mai desktop, let me show u it!
Originally uploaded by StrangeTikiGod
Here's my desktop after a week of being used, loved, and broken in.

[Y]ou have [...] an Administration which instead of twirling its thumbs has rolled up its sleeves. We will keep our sleeves rolled up.

We had to struggle with the old enemies of peace—business and financial monopoly, speculation, reckless banking, class antagonism, sectionalism, war profiteering.

Never before in all our history have these forces been so united against one candidate as they stand today. They are unanimous in their hate for me—and I welcome their hatred.

-FDR on the campaign trail in 1936.
Collapse